Keeping Swindon’s roads safe is an important priority for us. We risk assess and prioritise the finances we have available for pothole repairs and road maintenance, based on the capital funding we receive from central government.

This funding has decreased significantly over the past decade. Rules around how local government funding can be used means we are unable to reallocate money from other projects for example, major road schemes, to pay for more pothole repairs.

The Local Government Association estimate it would take councils in England £10 billion, and more than a decade, to clear the current local roads repair backlog.

Whilst we are aware some of Swindon’s roads need more permanent, long-term repairs, we must risk assess and prioritise repairs to ensure we keep our roads safe.

To help explain our approach, we have answered some of the common questions we receive on potholes below.

Roads can easily become damaged through heavy use, but not all damage is considered a pothole. Our Carriageway and Footway Defects Management Plan details our approach to identifying and repairing all manner of defects within the Highway Network.

Although we always consider the location of damage and the hazard it may create, generally on a road or pavement, a pothole is defined as being damage that is deeper than 40mm. Using a consistent measurement criteria helps us to identify and prioritise pothole and less urgent repairs. You can see an example of a pothole in the image below: 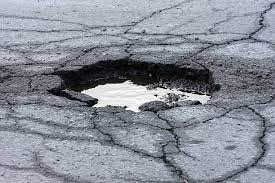 Residents may sometimes report what they think is a pothole, but it falls outside this measurement criteria so isn’t classed as one.

A defect like this would be assessed in line with our Carriageway and Footway Defects Management Plan, and a repair would be considered if it met our intervention criteria.

Over the past few years the Government has provided additional, discrete pots of capital funding for local councils to help repair potholes and to undertake other routine maintenance. This is usually limited to the financial year in which it is allocated, so must be spent by the end of the financial year, every 31 March. The funding is calculated according to the size of the local road network in each area.

As a road or pavement gets older, it becomes more porous and brittle. This allows rainwater to pass through cracks and weaken the surface. As people or vehicles put weight on the damaged surface, the material moves slightly and breaks up. In freezing conditions, any water that has already passed through the surface turns to ice. The ice then expands, which can cause the surface to break up more quickly.

We have a team of six highway inspectors who regularly check the Borough’s entire highway network to identify potholes and other problems on the roads and pavements.

They walk all 880km of Swindon’s roads and all 1165km of pavements, footpaths, cycle ways and alleyways at least once a year. In addition, the team inspect busier routes such as A or B roads in a slow moving vehicle on a monthly basis.

If you see a pothole circled in yellow paint, it means we have already inspected it and identified it for repair. We will then aim to complete the repair within one working day.

If you see an area with a yellow square painted around it, this means we have identified it as part of our patching programme and will aim to carry out the repair within six weeks, although some locations will take considerably longer as we need to arrange for licenses or traffic management to safely do the work.

If there is no yellow paint around a pothole (a defect deeper than 40mm), we may not be aware of it so please report it.

It currently takes us on average around three and a half days to repair a new pothole.

Around 16 per cent of pothole reports we receive from the public are actually a different type of road damage rather than a pothole, but we still inspect and arrange for an appropriate repair if needed.

Our priority is always to make sure the roads and pavements are safe, and then start planning for permanent repairs, however, preventative maintenance to repair a road before potholes develop is our aim. We use four main methods to maintain and fix roads:

When a road surface is cracking around the pothole, or there are several small repairs needed in a road, we may have to temporarily fix the pothole to make the road safe. We would then return later to repair a much bigger patch.

It can take a few months to arrange a large repair because it may require a significant amount of planning, road closures, tarmac, machinery and labour. On major roads this can also cause significant disruption to road users.

Weather is also a factor. If it’s too wet, or too cold, the repair will not set properly. In these cases, we fill the hole temporarily and then come back to do the permanent repair when the weather is improved. If we did the main fix in bad weather it could break quickly, wasting time and money.

We do repair potholes all year round, but extremes of wet or cold weather can affect how long these repairs last due to the effect of the temperature on the repair material. This may mean that a site may be visited on multiple occasions if the repair fails.

We also carry out patch repairs in winter, but have to avoid periods of extremely cold weather which accelerates the cooling of the hot material, making it more difficult to get a well compacted finish, and therefore reducing the life span of the patch.

Similarly, in periods of very hot weather, the disruption to traffic due to road patching could be worsened as we need to keep areas coned off, sometimes for several hours after the work is completed. This allows the material to harden enough to take the weight of vehicles.

A simple pothole can be repaired by two workmen with minimum machinery and materials and costs around £44 to repair each one.

When a more long-term repair is needed, such as a patch repair, we need to dig the road up and replace a larger, often deeper quantity of material than a simple pothole repair. Carrying out the work, with skilled operatives, all the vehicles, compaction plant and hot material they need, costs around £75 per metre square. In addition to this, the cost of any traffic management, such as road closures or traffic lights, needs to be added which could amount to several thousands of pounds.

Roads can easily become damaged as many of our roads are used by tens of thousands of vehicles each day. This becomes worse during the colder months, but not all damage is considered a pothole and not all damage needs a repair.

Only defects deeper than 40mm and present a high risk to safety will be prioritised for an urgent pothole repair as this depth is necessary to ensure the material used does not break up under the heavy weight of vehicles.

Areas where the defect measures between 30mm and 40mm on a road, or 26mm and 40mm on a pavement, will be identified for a patch repair where the surrounding material is cut out to a suitable depth and new hot material is laid.  This patching work is much more disruptive to road users and can involve costly traffic management such as road closures or traffic lights, which means it can take several months to plan.

Surface wear or damage measuring less than 30mm on a road, or 25mm on a footway, are unlikely to be identified to be repaired, but will continue to be monitored by the Highway Inspectors during their regular visits and a repair raised as soon as necessary.

Some larger areas of deterioration may be highlighted for consideration for inclusion in a programme of major works of surface treatment to prevent further deterioration.

Firstly, we really appreciate you taking the time to help us improve the safety of Swindon’s roads. Once you’ve completed the online form, you’ll receive an email response from us. This confirms that your report is now with our Highways Team, who will aim to inspect it within four working days.

Funds from vehicle excise duty (VED) don’t come directly to us, these are collected by central government.

You may be entitled to a compensation claim against the Council if you or your property has been damaged because of a fault in a road, pavement or cycle path. The outcome of a claim depends on many different factors and you are not automatically entitled to compensation.

A claim form is available to download: Vehicle claim form

All legitimate claims are assessed individually and fairly and, where the Council is negligent, we will seek to settle the claim as quickly as possible.

More information on making a claim is available in this document: Making a liability claim against the council

For small potholes, we use a material called Ultracrete. The material is laid cold and is designed to be a first-time fix.

When there are a significant number of potholes or a pothole is quite big, we use a hot material from a mixing plant.