White Hart roundabout will reopen to motorists on Sunday (14 November) following major reconstruction work to increase the life expectancy of the road. 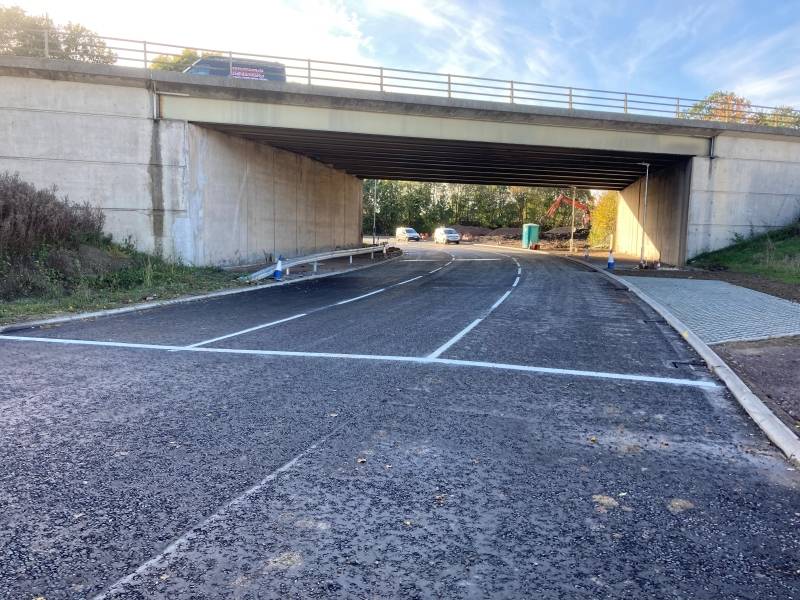 The roundabout was closed to traffic on 16 August after Swindon Borough Council’s contractor for the scheme, Osborne Infrastructure Ltd, confirmed significant defects in the road base underneath the roundabout while completing the junction improvement works earlier this year.

The road was originally built in the 1970s and was reaching the end of its service life. The impact of increasing traffic levels and modern heavy goods vehicles over that period had left the roundabout foundation in poor condition, resulting in increasing numbers of potholes and wider surface defects.

Over the last three months, the contractor has dug down almost a metre beneath the surface to build a new structure for the road base. The new stronger carriageway is 45 per cent thicker than the previous construction and is made up of thicker layers of road surfacing materials and crushed rock foundation layers, in line with modern construction methods.

The reconstruction work has not been without its challenges. During excavation, the contractor discovered that the higher-than-expected groundwater table had severely weakened the underlying clay which holds up the road base.

In order to strengthen the road surface and subsequent layers, a modified road structure design was introduced which involved laying reinforced plastic grids above the clay and between the stone layers of the road.

Despite the additional work, the contractor through careful planning and hard work from their supply chain working six days a week, has been able to shorten the programme and take advantage of the dry weather through September and October.

White Hart roundabout will reopen to traffic on Sunday (14 Nov) in time for the busy Christmas shopping period. Although the roundabout will be open, there will still be surfacing works left to complete on the A420 and surrounding slip roads. This surfacing work will be undertaken under night-time closures (8pm to 6am) to reduce the impact on residents and trade for local retailers. The surfacing dates and locations are set out below:

Traffic management will still be present on the carriageway once the roundabout has been reopened, including lane closures and temporary direction signage, while work continues on the junction improvement.

The overall £30m improvement scheme is due to be completed in February next year when the new northbound slip road to the A419 will be opened.

The cost of the carriageway reconstruction work at White Hart roundabout will be met through existing contingency funding for the scheme.

White Hart is one of several key junctions being upgraded to help mitigate the impact of the New Eastern Villages (NEV) development being built to the east of the A419.

The schemes at Gablecross roundabout, Nythe Road and Piccadilly roundabout are also progressing well despite utility complications, and are scheduled to be completed this winter. These roads remain open to motorists, and residents are being encouraged to be mindful of the operatives working on these schemes when travelling in the area.

Councillor Gary Sumner, Deputy Leader of Swindon Borough Council and Cabinet Member for Strategic Infrastructure, Transport and Planning, said: “The reconstruction work at White Hart roundabout was a significant challenge and I am extremely grateful that our contractor was able to get the job done as quickly and efficiently as possible, despite the complications with the weakened clay underneath the road base.

“I know that the last three months have been incredibly frustrating for both local residents and businesses and I do sincerely apologise for the inconvenience, but had this work not been completed, there was a high probability that the road base would fail in the short term. We can now be confident that White Hart roundabout will be fit to last for decades to come.

“Although the roundabout has reopened, lane closures will still be needed on the carriageway until the new northbound A419 slip road is opened. I’d like to thank residents and businesses for their ongoing patience while this work continues.”

Residents can stay up to date with roadworks as part of the NEV scheme by signing up to the NEV newsletter: www.swindon.gov.uk/newsletter