A major Swindon gateway will turn red to create a poppy effect to coincide with this year’s Remembrance commemorations. But the change will occur thanks to a pre-loaded memory card rather than as a result of Mother Nature.

The colourful display will be projected using new lighting that has been installed at Greenbridge roundabout to put the finishing touches to the £5.3m junction improvement scheme.

The roundabout has also been identified as a potential site for future digital advertising and the new lighting is a way of making the junction more attractive to potential advertisers.

The unique RGBW (Red, Green, Blue, White) LED lighting system produces a wide range of colours and was chosen to highlight the trees and to make an impressive visual display of the roundabout.

In November, the lighting system will be coloured red with random lights fading to green and back to red to create the impression of a field of poppies moving in the wind.

Currently the lights are set so they create both a sunset and dawn effect, while after dusk the lights are set to produce a number of pre-programmed colour changing sequences including a representation of the spokes of a giant steam engine wheel rotating, alternating stripes of colour, and a colour ‘spiral’.

The lights will also allow the Council to set the colours in support of various events or awareness days.

The improvements to the Greenbridge roundabout junction were part of a programme to improve major routes into the town to keep pace with the future development of the New Eastern Villages.

The upgraded roundabout, which was completed early last year, now has extra lanes around the roundabout, widened entry and exit routes, and traffic signals installed on all approaches. The scheme also created additional pedestrian and cycle crossings as well as a new exit from the Greenbridge retail park to reduce traffic on the roundabout.

The new junction will improve road links towards the east of Swindon, where 8,000 new homes, a district centre, new schools and employment for up to 4,000 people will be created over the next 15 years as part of the New Eastern Villages (NEV) expansion.

The new colour changing lighting system formed part of the landscaping project which saw the roundabout re-profiled, new trees planted and the laying of wildflower earth. The landscaping cost £166,000, a third of which was spent on the lighting and was paid for out of Section 106 developer contributions specifically earmarked for public art projects.

Cllr Toby Elliott, Swindon Borough Council’s Cabinet Member for Strategic Planning and Sustainability, said: “Swindon is famous for its roundabouts and the work to redesign the Greenbridge junction in preparation for the New Eastern Villages gave us the opportunity to create a welcoming feature for motorists as they make their way into town.

“The lighting uses the latest technology and, as an Armed Forces Covenant Champion, I am delighted we will be able to create the Remembrance tribute later this year. It is a great example of how we can use the lights to promote various activities or themes. We now have the capability to turn the lights pink in support of a cancer charity or even have them on red for when Swindon Town are playing at the County Ground.

“The work to install the lighting also created the capability for digital advertising on the roundabout, which gives us the opportunity to develop an income stream to the Council in future years.

“Once the trees and wildflowers are fully established on the roundabout it will create an even more spectacular display.” 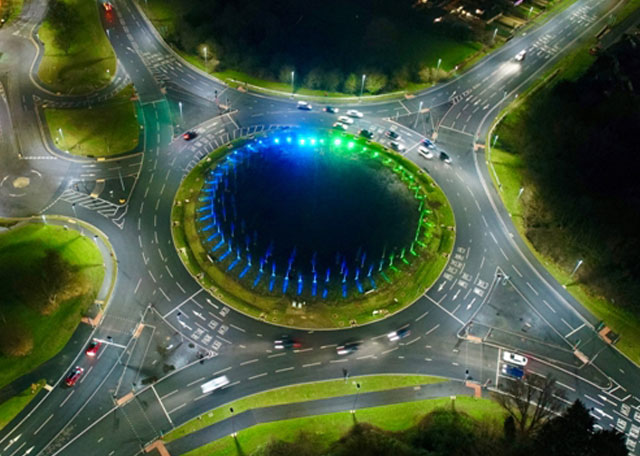