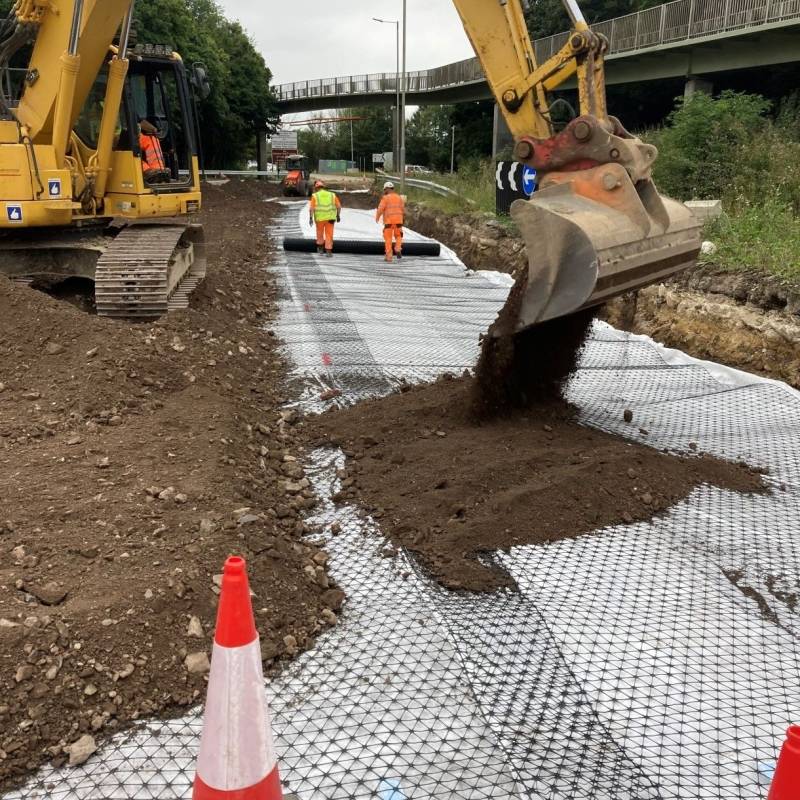 For the last three weeks, Swindon Borough Council’s contractor, Osborne, has begun building the road’s sub base from scratch after serious defects were uncovered earlier this year.

But, during the course of that work, Osborne has discovered that the higher than expected groundwater table has severely weakened the underlying clay which props up the road base.

Now, in order to strengthen the road surface and subsequent layers so it can take the weight of heavy goods vehicles for the next few decades, a modified road structure design is being introduced which will involve laying reinforced plastic grids above the clay and between the stone layers.

These work by distributing the vehicle load across a wider area, extending the working life of the finished road.

Although the additional work is well underway, the roundabout closure could be extended for an additional four weeks, although Osborne are hoping to minimise this as much as possible.

The extra work is being paid for out of contingency funding for the overall scheme. Osborne has already dug down almost a metre beneath the surface to build a new structure for the road base.

The nature of the work means it is not safe to keep the roundabout open to through traffic. Access continues to be maintained for emergency services only and diversions remain in place for all other road users.

Residents are advised that businesses in the local area remain open for customers.

White Hart roundabout is one of several key junctions being upgraded to help mitigate the impact of the New Eastern Villages (NEV) development being built to the east of the A419.

Although traffic will be able use the roundabout later this year, the overall £30m improvement scheme is due to be completed in February next year as it also involves creating a new bridge over the Great Western Mainline and a new northbound slip road.

Once completed, improvements to the junction will include an increase in the number of lanes on the roundabout, the addition of traffic signals and the widening of the A419 southbound slip road.

Councillor Gary Sumner, Deputy Leader of Swindon Borough Council and Cabinet Member for Strategic Infrastructure, Transport and Planning, said: “It is only when you get right underneath the surface that you begin to get the full picture of what is going on and the work at White Hart is proving to be a case in point.

“Although the extent of the problem with the groundwater softening the clay undersoil was unexpected, we have been quick to identify a solution to redesign the scheme and this means we can rebuild the junction and be confident it will be fit to last for decades to come.

“We anticipate the extra work could take four weeks but our contractor is working six days a week, 12 hours a day, so will be doing everything possible to claw back that time.

“I would like to remind residents that the businesses in St. Margaret’s retail park and Sainsbury’s remain open throughout this work and are easily accessible via the diversion route in place.

“I know this current closure is causing major inconvenience to local residents, nearby businesses and motorists who use the junction, but it is crucial we get this major junction upgrade finished and ensure that it is built to last.

“We continue to work closely with our contractors to reduce the impact of highways schemes in the Borough on our residents.”

Residents can stay up to date with roadworks as part of the New Eastern Villages (NEV) scheme by signing up to the NEV newsletter: www.swindon.gov.uk/newsletter