Stores were caught with illegal tobacco in a joint operation between Swindon Borough Council’s Trading Standards team and Wiltshire Police. 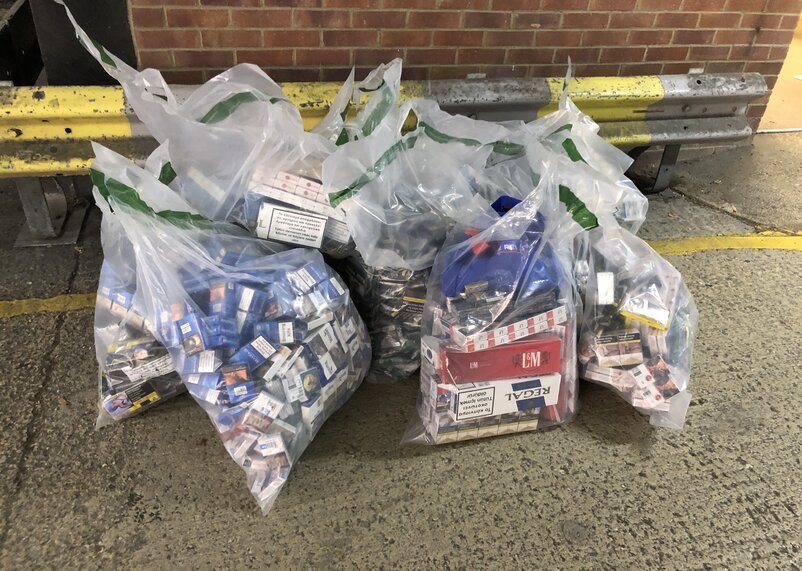 The operation was supported by the South West Illegal Tobacco Team and Wagtails detection dogs.

Officer seized cigarettes and hand-rolling tobacco suspected to be illicit and counterfeit from a storage container linked to one of the shops and two of the domestic premises.

Trading Standards estimate a total of 2,800 packets of cigarettes and 450 pouches of hand rolling tobacco were seized in total. Officers estimate that the ‘street value’ of the items seized is £12,000, but the lost business revenue is estimated at £50,000. The value of revenue lost to the UK is estimated at £28,500.

Illegal tobacco brings criminals into local communities and into contact with children. As well as being unregulated, illegal tobacco is often bought at ‘pocket money prices’.

This attracts younger smokers and allows those who could otherwise not afford to smoke, to maintain their habit and undermine their attempts to quit.

Councillor Cathy Martyn, Swindon Borough Council’s Cabinet Member for Housing and Public Safety, said: “Your health, your wellbeing, and your safety is our priority. There are no health warnings on illegal tobacco products. They present serious health risks to those who buy them, and they put money into the pockets of criminals.

“People who sell counterfeit tobacco also don’t care who they sell it to, sometimes selling to children. It brings crime into our communities, often in the shape of human trafficking, drugs and loan sharks.

“This operation sends out a clear message that selling illegal and counterfeit tobacco will not be tolerated in Swindon and we will take action, with our partners, against those who are caught with these goods on their premises.’’

PC Nick Finning, who led the operation on behalf of Wiltshire Police said: “We have received a number of complaints about illegal tobacco being sold in some of the shops on Manchester Road as well as reports from some people that they have been taken ill after smoking this.

“Obviously, we have no idea what goes into this type of tobacco as it’s unregulated and illegal.

“As a result of these reports, together with our partners at Swindon Borough Council, we’ve gathered our intelligence, done test purchases and built up the information we needed to help with this operation today (11/09).”

Picture: some of the illegal tobacco that was seized by the Council's Trading Standards team and Wiltshire Police earlier today.