Wood Street closure to come into force this weekend

Wood Street in Old Town is to be closed to traffic on Friday, Saturday and Sunday nights to make the area safer for pedestrians. 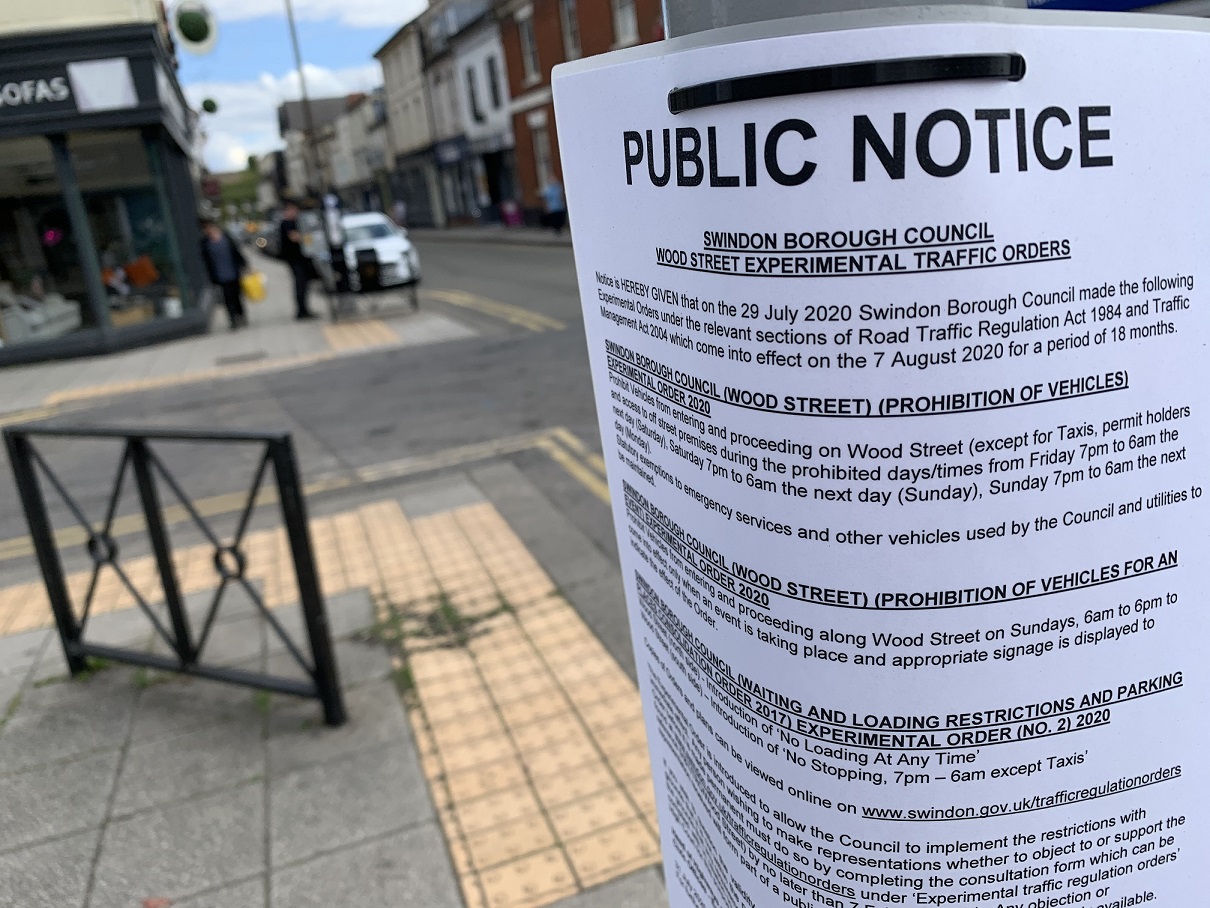 Swindon Borough Council is trialling a new Experimental Traffic Regulation Order which will come into force on Friday, 7 August and will be in place for 18 months.

The Order was first announced back in March this year and was scheduled to come into force on Monday, 30 March, before the coronavirus outbreak put a halt to the plans.

However, the Council has remained committed to the scheme and councillors are pleased to announce that it will come into force from this Friday.

Currently, pedestrians leaving pubs and clubs are at risk of coming into conflict with through traffic, parked cars can prevent emergency service vehicles accessing Wood Street, and people often get out of taxis into oncoming traffic due to the rank being on the north side of the road.

Councillor Cathy Martyn, Swindon Borough Council’s Cabinet Member for Housing and Public Safety, said: “We take public safety very seriously and this Traffic Regulation Order is intended to make sure people can enjoy themselves on Wood Street at weekends without having to worry about passing cars.

“Due to the coronavirus outbreak, we were unable to proceed with the changes when they were first announced back in March, but officers have been working extremely hard behind the scenes and I am pleased to be able to say that the changes will come into force this weekend.

“We have been working closely with Wiltshire Police and we are both confident that this Order will make a positive difference to the already popular nightlife in Old Town.”

Swindon Superintendent Adrian Burt, of Wiltshire Police, said: “We fully support the trial of this new Traffic Regulation Order in Wood Street. This area of Old Town is hugely popular, especially during the weekends and it is important that the public feel safe when they are out and about.

“The trial of this new order will hopefully improve public safety and reduce the risk of any road related incidents in the area. We will continue to have a visible presence in Wood Street during Friday, Saturday and Sunday nights and will maintain a close working relationship with Swindon Borough Council as they monitor the impact of this order.”

Other changes include the relocation of the taxi rank from the north to the south side of the street and the introduction of ‘no waiting’ and ‘no loading at any time’ regulations on the north side.

After the first six months of the Order being in place, officers at the Council will review feedback and in consultation with councillors will agree any modifications that need to be made.

Anyone wishing to make comment on the proposals will be able to do so during the first six months via the Council’s website. Any comments received will be used to inform the future of this trial.