A scheme to create extra capacity at one of Swindon and Wiltshire’s busiest junctions is now fully operational.

The multi-million pound upgrade of Junction 16 of the M4, which has been fully opened on time, will ensure it can cope with future traffic levels and cater for further development in the surrounding area, providing a boost to the economy of Swindon and Wiltshire.

Approximately 5,500 vehicles an hour currently use Junction 16 at morning and evening peak times and this is expected to rise by more than 50 per cent over the coming years.

The huge engineering project, which was carried out by HOCHTIEF, began 17 months ago with the key highway interchange remaining open throughout.

The new larger junction has been remodelled and improvements have included a new dedicated right turn from Royal Wootton Bassett towards Wroughton to divert traffic away from the main roundabout, while lanes have been added to approach roads, motorway slip roads have been widened, drainage has been improved and new traffic signals and street lights have been installed.

And while the groundwork was laid for the new road surface, 1.5km of drainage pipes were installed along with 140 gullies, 6km of street lighting cabling and 38km of traffic signal cabling.

The motorway junction redesign was a requirement of the outline planning permission for the major housing development at nearby Wichelstowe and needed to be complete before the 1,100th property on the site is occupied.

Cllr Mary Martin, Swindon Borough Council’s Cabinet Member for Communities and Place, said: “Tens of thousands of motorists use Junction 16 every day and we know our plans for growth, coupled with our hugely successful economy, will mean more vehicles on our roads in the years to come.

“These major improvements will ensure we have extra capacity to help keep Swindon and Wiltshire moving in the future, benefitting both residents and local businesses.

“To keep Junction 16 open to vehicles while making such significant improvements was no mean feat and I am extremely pleased we have been able to complete the work on schedule.”

Adam Schallamach, Chair of SWLEP’s Transport Sub-group, said: “Enabling a well-connected, reliable and resilient transport system to support economic and planned development growth is one of the investment priorities for the Swindon and Wiltshire Local Enterprise Partnership (SWLEP).

“We invested £5.9m in this scheme which will deliver the Wichelstowe development, create 31 jobs and ensure that the economic growth of Swindon is not hindered by traffic congestion and unreliable journey times.”

Cllr Bridget Wayman, Wiltshire Council cabinet member for highways, said: “Wiltshire is on the map as a great place to live and an exciting place to do business. It is important we keep ahead of the game to ensure residents and the local economy are supported by the right infrastructure.

“The improvements carried out at this key gateway to the county will go some way to help us achieve this.”

Now the improvements are complete, contractors will monitor the junction over the next few weeks to ensure it is operating as expected. Motorists unfamiliar with the new layout of the junction are advised to take extra care when navigating it for the first time.

Further details and updates of highway projects in the Swindon area are available via the Council’s Highways News e-newsletter. To subscribe visit: www.swindon.gov.uk/newsletter 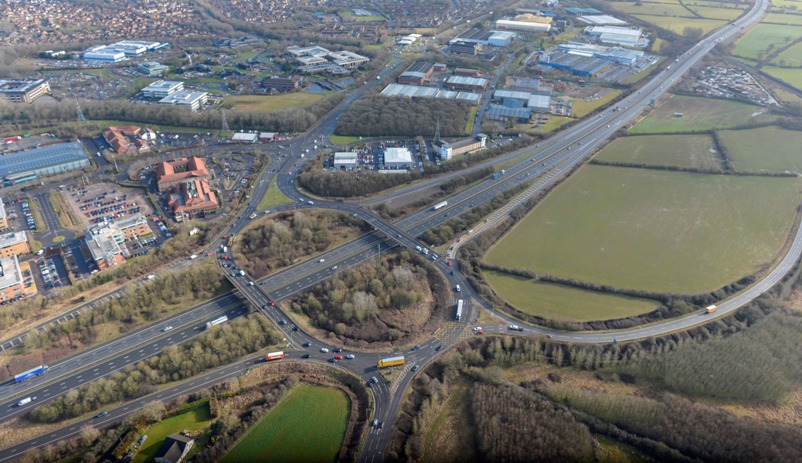 Junction 16 before the recent improvement work