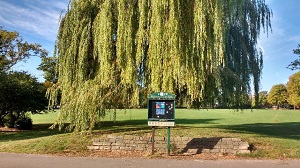 GWR Park was established in the 1840’s initially as a cricket pitch for GWR employees and then as a formal park in the 1870’s when formal beds and glasshouses were laid out.  Since that time the park has played a key role in the sporting and social life of Swindon, hosting many social events such as the annual Children’s Fete which would attract crowds of over 30,000 people.

The Heritage Action Zone funded the production of a Conservation Management Plan for GWR Park by landscape architects Cookson and Tickner. The plan includes a detailed, illustrated history of the park and sets out the vision or action plan for the next five to ten years. It was informed by extensive consultation with local people and formally endorsed by South Swindon Parish Council in October 2021.

For further information about the history of the park, view the following documents: